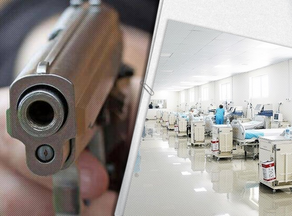 The incident happened at 6 p.m.

The attackers initially tried to enter the building, which was refused by security guards because they noticed that they were armed.

After the refusal, they first fired in the security guards' direction and then continued firing without a specific aim.

An emergency department is located at the entrance, from where the attackers got into the hospital. Patients on managed breathing are placed there.

The attackers took GEL 3 000. According to Dr. Nino Kiladze, the attackers got acquainted with the guards as patients.

"They asked to open the door. When the guards refused to do so, three shots were fired, but no one was injured. These two people were probably on foot. They took GEL 3 000. A bullet could hit our employee, or a patient," the doctor said.

Investigative actions are underway on the territory of the clinic at the moment. Doctors are testifying.