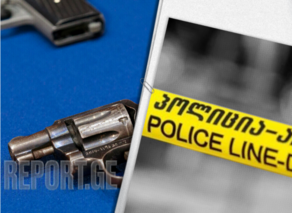 The Ministry of Internal Affairs of Georgia has released a statement on the Zugdidi gold market robbery.

"On February 26, on Rustaveli Ave, Zugdidi municipality, an assailant committed a robbery crime in the first half of the day. An armed robber broke into the gold market and, threatening a salesperson with his gun, snatched gold jewelry from her. The robber fled the scene afterward. The investigation of the case has already been launched," the statement reads.

The statement goes on to say that police officers launched investigation shortly after the crime was committed.

Upon noticing the law enforcement officers, the suspect opened fire on them in the vicinity of Rustaveli Street. The police took an extreme responsive measure and opened fire on the active shooter in an attempt to defend themselves.

Later, police officers found an offender (DOB 1996) unconscious and took him to a hospital. However, doctors failed to save him.

According to the statement, the late man's body will be subject to forensic examination.