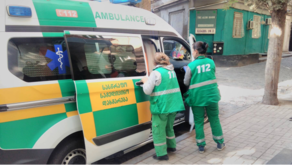 An incident has occurred in the town of Akhmeta, region of Kakheti, Georgia after the body of Georgian ‘criminal boss’ Shota Chichiashvili was buried today.

A car driven by a woman rushed into a restaurant where the deceased’s friends and relatives had gathered. Three were injured. One of them was transported to Tbilisi after medical examination.

The Georgian Interior Ministry has confirmed the fact but specified that the incident has nothing in common with Shota Chichiashvili’s burial.

Georgian ‘criminal boss’ Shota Chichiashvili was killed during a special operation on October 2, in Ukraine.