Fateful night for friends - one killed, one unconscious 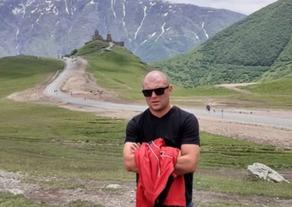 The night of June 28 in the village of Chumlaki, Gurjaani Municipality, turned out to be fateful for friends. A 30-year-old Shota Mazmishvili was killed, and a 28-year-old Anzor Mosesov has been fighting death at the Geo Hospital in Gurjaani.

According to the doctors, after the 5-hour operation, the young man's condition is steadily severe.

The murder was preceded by a verbal confrontation between the alleged perpetrator and two friends.

According to a source of report.ge, friends gathered for dinner at Anzor Mosesov's house last night, and after dinner, they went to the store on the same street to buy cigarettes. They argued with 49-year-old Davit Nadashvili, who lives nearby. According to locals, there was a dispute between Mosesov and Nadashvili, but the cause of the conflict is yet unknown.

"The quarrel escalated into a confrontation, after which Davit Nadashvili went home, took out a firearm and shot both of them. First, he shot the murdered man, then he shot Mosesov," locals said.

Mazmishvili died before being taken to hospital, and Mosesov arrived with a wound in the chest area. He is currently in the resuscitation department.

So far, neither the family of the murdered nor the wounded commented on the issue. Whether there was a confrontation between the parties in the past is still unknown.

As reported by the Ministry of Internal Affairs to report.ge, the investigation launched under two articles of the Criminal Code: attempted premeditated murder, Article 108 and Article 109 -3a, murder in aggravated circumstances.

Investigations into the incident are still ongoing.