Memorial to victims of occupation vandalized in Tbilisi 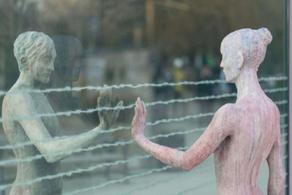 The Memorial to victims of occupation at Occupation Victims' Park in Krtsanisi district, Tbilisi, has been vandalized. The Tbilisi City Hall has provided Report News Agency with this information.

The act of vandalism was reportedly committed in the evening. Law enforcement officers are now working on the scene.

The Memorial was put up at Tbilisi Mayor Kakha Kaladze's initiative in January of 2021.

Sculptor Irakli Tsuladze won the competition announced on 6 December 2019 and was tasked to make the Memorial.

The memorial structure comprises bronze sculptures of two human figures and a multilayer glass wall between them, with barbed wires engraved on the wall.