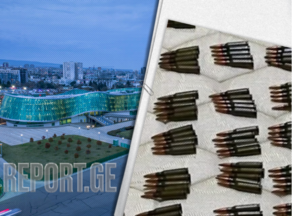 Officers of the Ministry of Internal Affairs seized illegal firearms and ammunition at various times in Tbilisi, Marneuli, Lentekhi, and Akhaltsikhe municipalities and detained four people.

N.B., born in 1975, previously convicted, was detained in Tbilisi. During the search, the police seized a CZ-type firearm, a pistol, and six ammunition cartridges as evidence.

G.L., born in 1974, previously convicted, was detained in Lentekhi. During the search of the house, a CZ-type firearm, three pistols, and 45 ammunition cartridges were found as evidence.

Z.J., born in 1982, was detained in Akhaltsikhe municipality. An AK-74 Kalashnikov assault rifle, a pistol, and 30 rounds of ammunition were seized from his home.

J.Sh., born in 1992, was detained in Marneuli. During the personal search of the detainee, TT system firearms, pistol, and seven ammunition cartridges were seized as evidence.

The offenses carry a sentence of 3 to 7 years in prison.