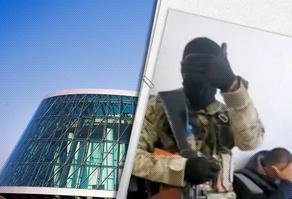 The MIA has released another statement on the recent Zugdidi crime, which is presented below:

We want to provide the public with further information on the Zugdidi criminal offence. Law enforcement officers are still actively carrying out special operational and investigative activities.

We once again call upon you to avoid the dissemination of unverified information, which may prevent the police from carrying out operations. The Ministry of Internal Affairs will regularly provide you with further details.

At this stage, 43 people whom the gunman held hostage in the bank building have been released, and their safety ensured. Investigation activities are still underway at the scene," the statement reads.

A gunman broke into the Bank of Georgia in Zugdidi and took 19 hostages earlier today. He demanded half a million dollars, a helicopter, and threatened to kill victims unless his demands were met.

At around 10 p.m., the captor left the bank building, together with three victims. On leaving the bank, he was armed with a hand grenade.

No information on the armed assailants and the hostages' whereabouts has yet been released.