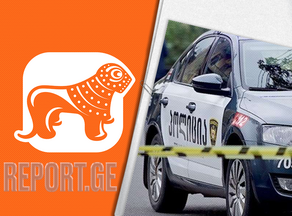 The armed man who broke into the Bank of Georgia building a while ago has been detained. Vazha Siradze, the head of the Interior Ministry's Patrol Police Department, has told Reports News Agency.

All hostages have reportedly been freed.

Director of the Tbilisi Police Department Shalva Bedoidze negotiated with the assailant and managed to apprehend him in the end.

An armed man has broken into the Bank of Georgia in Avlabari district, Tbilisi.