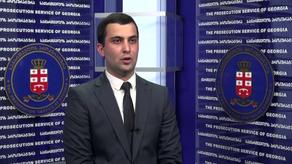 "Detention of the second individual accused of murdering Murad Tsurtsumia proved possible after obtaining further evidence and questioning the deceased's brother," Prosecutor Davit Gumberidze said. In his words, the Prosecutor's Office will apply for a remand to the court within the timeframe determined by law.

"Yesterday, we promised the victim's family and the public that the investigation would be held in the shortest possible period of time. The status quo which we have today is that one more individual, Vakhtang Burdzenidze, has been detained and accused of murder," Davit Gumberidze declared.

Another individual, Vakhtang Burdzenidze, has been apprehended over the Dampalo cemetery murder in Varketili, with this information being publicized today.

A special forces team member has also been detained over the Dampalo cemetery murder and has already been sentenced to pretrial detention. He has confessed to the crime.