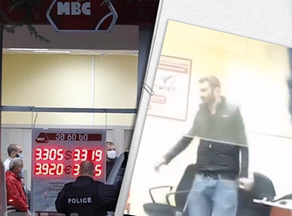 Video footage showing a gunman who broke into JSC Microfinance Organization Micro Business Capital on Tsereteli Avenue has been released on social media. In the footage, the assailant is holding a grenade.

According to the MIA, the gunman has taken nine hostages in the microfinance organization office. Vazha Siradze, the head of the Interior Ministry's Patrol Police Department, has released the information.