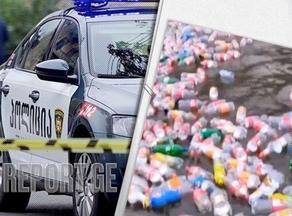 "The investigation established that the accused threw a large number of polyethylene bottles into the river Ktsia in Bolnisi Municipality on June 30 of 2021 and polluted the river. Video footage of the fact was spread on various social networks.

Law enforcers were soon able to identify the offender and arrested him as an accused in Bolnisi," the Ministry of Internal Affairs said.

According to the agency, the fact of water pollution is being investigated under Article 292 of the Criminal Code of Georgia.

The offense carries a maximum sentence of one year in prison.