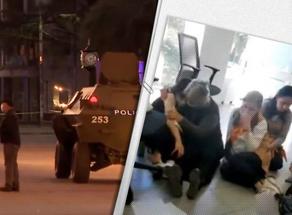 The case of the Zugdidi bank robbery has been re-qualified, and now the investigation is in progress under Articles 236, 323 and 329 of the Criminal Code of Georgia, envisaging a terrorist, hostage-taking act, illegal purchase, storage, and possession of firearms. Deputy Interior Minister Vladimer Bortsvadze said at the briefing at Zugdidi regional police department that investigative efforts are active to determine the offender's whereabouts.