Boy pictured on the cover of Nirvana's album suing the band 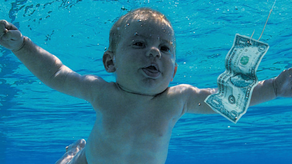 The person featured on the cover of the band Nirvana's cult album Nevermind has filed a lawsuit against the group for child pornography, Variety writes.

The album was released in 1991. The album cover depicts a naked baby floating in the water. The picture also shows a dollar bill on an anvil, which seems to be followed by a child, largely perceived as a declaration of capitalism.

The naked child depicted on the album cover turned out to be Spencer Elden, who is now 30 years old.