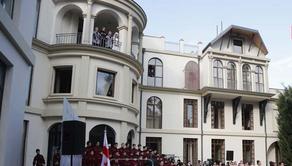 The event was attended by the Minister of Culture, Sports and Youth Affairs of Georgia Tea Tsulukiani, members of Parliament, and family members of Anzor Erkomaishvili.

Before the opening, the State Academic Ensemble of Folk Song and Dance "Rustavi" performed.

According to the head of the Tbilisi City Council, Giorgi Tkemaladze, one of the streets in Tbilisi will be named after Anzor Erkomaishvili.