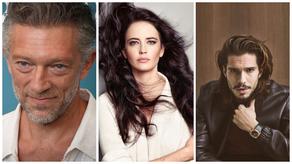 Vincent Cassel and Eva Green will star in the new film as Athos and Milady, respectively.