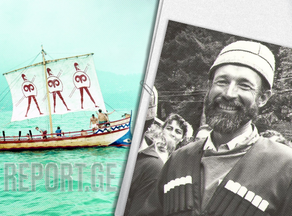 The famous British explorer, historian, and writer, Dr. Tim Severin from the University of Oxford, died in Cork, Ireland, at the age of 80.

In 1984, Tim Severin decided to test the reality of the Argonauts' myth and traveled from Greece to Georgia on a handmade ship. The Argonauts of the New Age, led by Captain Tim Severin, began their journey on May 3, 1984. The crew of "Argo" consisted of 13 Englishmen and Irish members.

Georgian rowers joined them in the territorial waters of Georgia. The expedition got acquainted with the archeological excavations of Vani, visited Chkvishi, got acquainted with Nokalakevi and Svaneti. Tim Severin and the Argonauts left Georgia on August 2, 1984. Georgian Television Film Studio made a documentary "After 33 Centuries" about it.

In 2014, at the Georgian National Tourism Administration's invitation, Tim Severin and the participants of the expedition revisited Georgia to mark the 30th anniversary of their trip.