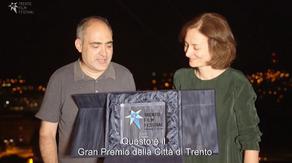 The documentary film Tunnel by Nino Orjonikidze and Vano Arsenishvili became the winner of the Trento Film Festival. The film received the main prize of the festival Golden Gentian.

As the press service of the Georgian National Film Center informed reported.ge, the film directors attended the award ceremony online and welcomed the festival guests from Georgia.

The action in the film takes place in Kharagauli district, around the Moliti Railway Station. As part of the Georgian Railway Modernization Project, a high-speed train is to connect China with Europe via Georgia, turning the lives of small villages upside down.

The world premiere of Tunnel took place in 2019 at the International Documentary Film Festival Amsterdam (IDFA).

The film is a Georgian-German co-production.

The movie was created with the National Film Center's support and got presented in the competition program for the first full-length film in Amsterdam.