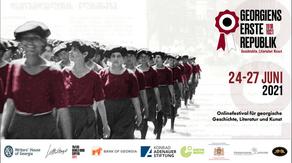 On June 24-27, the Writers' House, in collaboration with the Berlin House of Literature Lettrétage and with the support of "Tbilisi - the World Book Capital," will hold an online literary festival for German-speaking countries, "The First Republic of Georgia - 1918-1921. History. Literature. Art."

The festival is dedicated to the ongoing literary, cultural, and political processes in the years of the First Democratic Republic of Georgia, Georgian-German relations, the 100th anniversary of the 1921 Russian occupation, and the 30th anniversary of Georgia regaining independence.