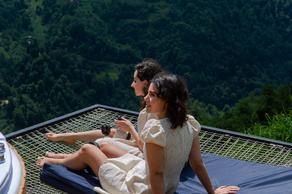 Georgian star working in Britain, Katie Melua, is shooting a new music video in Adjara. The shooting for Melua's new song took place in Adjara and lasted for five days. Filming is ending today - the Adjara Tourism Department spreads information about the news.

"For me, this is the first time of video recording in Adjara. I have spent all summers in Batumi. Batumi and the Black Sea are a joy for me. We are shooting two videos for two songs. We saw amazing places during this video shooting, and I think it should turn out very good and positive," Melua said.

According to the Tourism Administration, video recordings for the Georgian singer's new songs took place for five days in the Batumi Botanical Garden, Batumi Boulevard, Sarpi, and Tsikhisdziri shores and the village of Merisi.

"This is the first time that the diversity of Adjara nature, the combination of mountains and the sea, will be introduced to millions of fans of the singer worldwide. The Department of Tourism of Adjara is actively involved in the selection of attractive tourist places for filming. The director of the video is Mariam Sichinava, and the cameraman is Alex Omiadze. Designer Tako Mekvabidze takes care of each costume created especially for this project. The videos will be screened in the fall," the statement revealed.