Kirk Douglas's widow dies at the age of 102 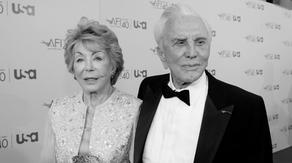 The widow of the actor Kirk Douglas, Anne Douglas, has died at the age of 102, at her home in Beverly Hills, People reports.

Kirk and Ann were married for 66 years. They had two children, Peter and Eric.

"Annie was more than a stepmother and was never evil. She did her best to make us show our best qualities, especially when it came to my father. Dad would never have succeeded without her support and partnership," said 76-year-old actor Michael Douglas.

Anne Douglas was a film journalist when she met Kirk Douglas in 1953. By that time, Kirk had already divorced Michael's mother, Diana.

Anne and Kirk got married in Las Vegas in 1954 and in 2004 celebrated their 50th wedding anniversary.