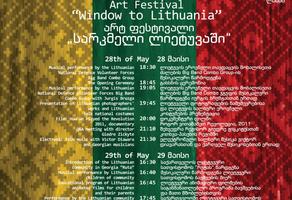 A two-day festival, "Window in Lithuania," will open today at 18:30 in Mziuri Park Amphitheater. The Deputy Mayor of Tbilisi, Andria Basilaia, will attend the event, Tbilisi City Hall reports.

According to them, "Window in Lithuania" will be held in Tbilisi for the first time and will present Lithuanian culture, art, sports, and traditions.

"The audience will have the opportunity to listen to compositions created by combining Lithuanian contemporary music and polyphonic songs. In addition, open-air Lithuanian film screenings and meetings with filmmakers will take place.

The program includes director Giedrė Žickytė's documentary "How We Played the Revolution," the debut film of Georgian director Maria Kavtaradze living in Lithuania Summer Survivors and Marius A. Markevicius's film on the importance of sport in restoring Lithuanian independence.

The event will also feature juvenile guests who will be presented with a program of animated educational short films as well as discussions with Lithuanian artists.

The two-day festival is organized by the Lithuanian communities "Laba" and "Ruta." The event is sponsored by the Lithuanian Culture Council and the Embassy of the Republic of Lithuania in Georgia. Tbilisi City Hall is the official partner of the festival," the information reveals.