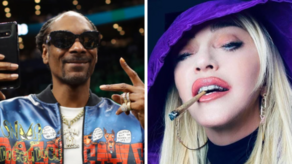 The Queen of Pop invites us in for a glimpse behind her cameo in Snoop's latest clip, for "Gang Signs" featuring Mozzy.

The full video dropped at midnight, and features Madonna dragging on what appears to be a cigar (or might something stronger), sporting platinum blond hair and wearing some fetching negligee.

"Was so much fun to show up in Snoop Dogg video for his new song Gang Signs!," she tweeted, along with two goat emojis.