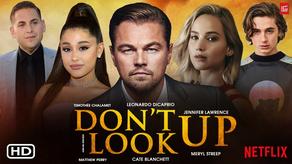 Streaming service Netflix has released a trailer for a new movie, "Don't Look Up," starring Leonardo DiCaprio and Jennifer Lawrence.

The comedy film tells the story of two junior astronomers who must warn humankind of an impending comet.

In addition to DiCaprio and Lawrence, the film also stars Jonah Hill, Meryl Streep, Timothée Chalamet, Ariana Grande, and others.

The premiere of the new film is scheduled for December 24, 2021.