Rehabilitation of Nokalakevi archaeological site to be completed in 2021

Rehabilitation of Nokalakevi archaeological site to be completed 8 December, 2020  11:00 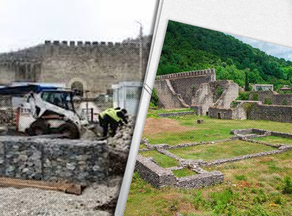 Under the auspices of the Ministry of Education, Science, Culture, and Sport of Georgia and with the financial support of the National Agency of Cultural Heritage Preservation of Georgia, the rehabilitation of the architectural and archeological Town-Fortress Nokalakevi (or Old Town) Museum-Reserve is underway and planned to be completed in 2021.

The National Agency of Cultural Heritage Preservation of Georgia has informed the Report News Agency that all architectural segments of the lower sites of the old town of Nokalakevi, including the secret tunnel, Eiffel structure, the steel bridge, royal baths, castles, and other structures, have been subjected to rehabilitation and conservation efforts.

The historical site of Nokalakevi was a hub in the Kingdom of Kolkheti in the 8th-7th centuries BC. In the 4th-3rd centuries BC, the residence of Kuji, a presiding Prince (eristavi) of Egrisi (West Georgia), was situated there. In the 4th and 8th centuries BC, Nokalakevi was the capital city of the Egrisi Kingdom called Archaeopolis (Ancient Greek: "Old City") and Tsikhegoji (in Georgian "Fortress of Kuji").

The Kingdom of Egrisi residence stretched over 20 hectares of land. The city was surrounded by three solid walls of the 4th-5th-6th centuries. Repeated archeological excavations on the Nokalakevi historical site resulted in the discovery of remnants of the city's high walls and castles of Egrisi kings (4th-6th cc), royal and public baths, the reservoir (4th-6th cc), the secret tunnel passing over the river, remnants of the churches of 4th-6th cc, and the 6th century Holy Forty Martyrs Church with its 16th-13th frescos.