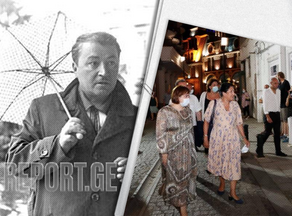 The film museum, named after the famous Georgian film playwright Suliko Zhgenti opens in Batumi. The authors of the museum project and concept are Oliko and Ketevan Zhgenti.

The presentation of the museum project was held on Khulo Street. The President of Georgia Salome Zurabishvili, the Minister of Education, Culture and Sports of Adjara Maia Khajishvili, acting Mayor of Batumi Archil Chikovani, members of the public and legislative and executive authority attended the event.

On June 22, 2020, at the event dedicated to the 95th anniversary of the birth of the famous Georgian film playwright, the decision of the Government of Adjara to open the Suliko Zhgenti Film Museum was announced.

The museum will reflect the history of Georgian cinema and the development trends of modern cinema. An important cultural-educational center will be created. The arrangement of the museum will start this year; the project is financed from the republican budget of Adjara.