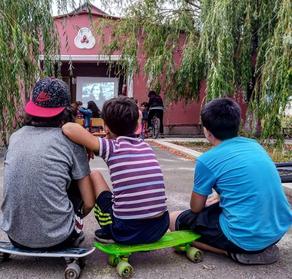 Summer Film School starts a new season in the mountainous villages near the occupation line of Georgia.

In the project film framework, specialists will visit the highland villages and villages located near the occupation line, where film screenings and discussions will take place daily for two weeks. Due to the security measures taken because of the coronavirus pandemic, the film screenings will be held in the open air.

Summer Film School got first implemented in 2015 by the National Film Center's initiative and with the support of the Ministry of Education, Science, Culture, and Sports of Georgia. In 2016, the EU program "Creative Europe" joined the project. The project aims to revive the cultural-educational life in the regions of Georgia and to strengthen the local cultural sector.

The popularization of cinema - showing Georgian and foreign films;

Promoting the development of analytical thinking - post-film discussions moderated by the film specialist;

Developing creative skills - getting to know the specifics of cinema and engaging in the creative process by making small films.