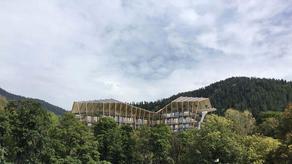 Marriott International High Class five star hotel of the Autograph Collection is being built in Abastumani by the initiative of the Georgia Tourism Development Fund which is the part of the Georgian Co-Investment Fund. According to the Fund representatives, 170-room hotel will be completed either by the end of the year or by the spring of 2020. Total investment is $34 million.

Autograph Collection 5 star hotel in Abastumani is being built on a 25,000 square meters of the Rainbow sanatorium which for now employs about 100 locals.

In addition to the Tourism Development Fund, another hotel is being built in Abastumani. In the first quarter of 2019 Bidzina Ivanishvili bought the largest state property in Abastumani. The former Hospital at 40 Paliashvili Street and the land around it, total 23,585 square meters was acquired by the company connected to the former Prime Minister for GEL 3.5 million.

The area was bought by LTD Sanapiros Xedi, company’s 100% stake is owned by Panama-registered company called Limestone Finance International. The owner of the Panama based company is Bidzina Ivanishvili, the Chairman of the Georgian Dream.