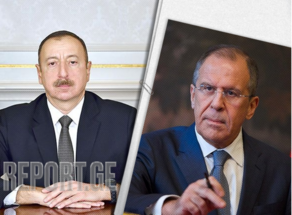 "The working group consisting of the Vice-Prime Ministers of Russia, Azerbaijan, and Armenia regularly discusses the practical aspects of unblocking all economic and transport communications in the South Caucasus," the Russian Foreign Minister Sergey Lavrov said during a meeting with Azerbaijani President Ilham Aliyev.

"There is no doubt that this is a potentially very serious transport hub. Achieving a balance of interests between all the states of the South Caucasus and their neighbors is crucial here. It is important to establish an economic and logistical regional framework. We can strengthen the role of the Caucasus in the modern, global economic and logistical chain," Lavrov said.

The President of Azerbaijan, Ilham Aliyev, hosted the Minister of Foreign Affairs of Russia, Sergey Lavrov, in Baku. Lavrov arrived in the Republic of Azerbaijan yesterday. During the visit to Baku, the Azerbaijani and Russian sides discussed issues of bilateral and regional cooperation, as well as cooperation in the international arena.