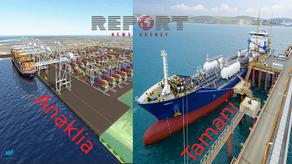 As Head of the Transport Corridor Research Center Paata Tsagareishvili states, the suspension of the Anaklia Port construction is most profitable for Russia. While the deep-port construction experiences suspension in Georgia, Putin's government is doing everything to develop the Taman port.

What will be the benefits Russia can receive from the Taman port?

''Russia has detected a risen number of containers in Batumi and Poti and increased the container capacity of the Port of Novorossiysk from 350,000 to 700,000. Simultaneously, it tries to install and infrastructure with a capacity of 1,5 thousand containers in the Taman port. Besides, Russia plans to install a Eurasia channel from Taman port to the Caspian Sea in parallel to the Volga-Don channel and to construct a new port lagoon along the Caspian Sea. The project will connect the Caspian and Black seas and create a center of the main load with which the entire flow of cargos from Asian will be automatically directed to the Taman port. It is a scheduled policy Russia follows. The Georgian government is doing its best to develop the Taman port, reach the desired depths, and ensure the attraction of global cargo flows in this way. It has already attracted billions to stand by the Taman port,'' Paata Tsagareishvili says.

In his words, the Anaklia Port construction termination leaves the modernization of the Georgian railway with no sense.

As a reminder, in 2011, Georgia launched a railway modernization project, which implies the increase of capacity on the passage.

If the Georgian railway capacity equals 17 – 20 mln tonnes today, the renovation will lead it to reach about 47 mln tonnes.

A total of 250 – 300 mln GEL has been spent on the project, and the chances to profit from the government-made investments are meager.

What does Georgia lose by suspending the Anaklia port construction?

''We have the sea, but we are not a maritime country. We have neither navy nor our port and vessels, but in case of the construction of the Anaklia port, we can create an excellent business environment. In case there are cargoes, we can create our naval company, but by suspending the project, we do not enjoy the chance to use the opportunity. Another considerable component we cannot use is ferry transfers. The railway and ferry transfers are observed in Poti and Batumi, but the location is so restricted that it bans the chance of development. All of our neighbors have ferries on the black sea, but Georgia – has not. For the ferry transfers, it is essential to construct the Anaklia port on an empty area. Besides, starting from Kazakhstan, ended with Azerbaijan, port infrastructure was improved almost everywhere, and the capacities increased as well. A narrow spot will be created in Poti and Batumi, and it will emphasize the development of the entire hub. It happens while the Anaklia Port is not built,'' Expert Tsagareishvili tells report.ge adding that the Poti Port will never replace the Anaklia one due to the Poti port's location will never enable it to have the capacity the Anaklia port can have.''

Why is the Taman port a rival of Anaklia?

''From the container transfers' point of view, the Taman port represents a direct rival of Anaklia port. More specifically, container transfers and related infrastructure represent the most profitable segment, representing the essential part for the development of any port. Russia has a scheduled policy expressed in the development of the Taman port after the Novorossiysk port capacities expire. The Russia-produced and export-oriented product (mainly the coal, metal, and wheat) transfers cannot be in continuous competition with the Anaklia port, and the latter is not for the procession of low-cost and other cargos for which the demand varies. The port, which is for private investment, outside the state port of Taman, the competition is provided with the port of Anaklia. It is planned to create a container infrastructure of 1.5 million TEU north of the port of Taman. Besides, one of the world's giants, the port operator from the Emirates, the company DP World, which owns 50% of the most extensive container line FESCO, will be fully included in the container business of the port of Taman. For attracting containerized cargo, FESCO owns 25% of the assets of the largest container rail operator in Russia, TRANSCONTAINER, which primarily operates the China-Europe-China route. It is in this financially profitable sector that Taman port is a competitor to Anaklia port," Tsagareishvili said.

Taman port locates on the Russian side of the Kerch Strait connecting the Black Sea with the Sea of Azov, on the opposite side of the Crimean Peninsula. The port will have seven operational terminals in 2024.

Depths on the approaches to the port are 20-25 meters. Vessels with a deadweight of up to 220,000 tons can enter the port.

The Anaklia Development Consortium was to build the Anaklia deep seaport, but on January 9, 2020, the Georgian government terminated the contract with the consortium and began searching for a new investor, while its construction started in December 2017.

As Minister of Economy and Sustainable Development of Georgia Natia Turnava says, the Georgian government does not plan to resume cooperation with the Anaklia Development Consortium for the construction of the port.

Minister of Economy Turnava showed a similar point of view on May 14, when the Anaklia Development Consortium announced that it was ready to attract investments in collaboration with the Georgian government and continue constructing the Anaklia port project.

The Georgian government plans to deepen the port of Georgia's coastal town of Poti.

As planned in Georgia in 2020-2025, investment projects worth 20-25 billion USD also included the port of Anaklia, which provides for 1.7 billion USD.