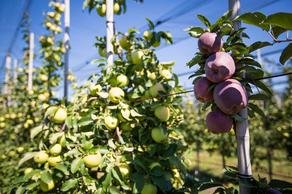 The process of apple harvesting is becoming more and more intense. Less volume of the harvest is detected this year due to bad weather. The estimated rate of the apple harvest teeters between 50 and 60 000 tonnes while last year the same rate hit 80,000 tones. Heavy hail hit and destroyed the apple gardens in almost all Georgian regions and consequently the quality problem arose.

The Georgian Ministry of Environment Protection and Agriculture told report.ge that the authority will do its best to avoid the apple export problems. Post-soviet countries still represent the export markets as in previous years.

‘The apple harvest has decreased in comparison with 2018. We failed to reach the target outcome despite the government provided us with the supporting projects,’ the ministry has reported.

‘While the harvest hit 78 – 80,000 tonnes last year, current estimated rate does not exceed 60,000 tonnes. As for the markets the apple will be exported mostly to post-soviet countries, especially to Russia,’ the Ministry reports.

The Unified Agro-project beneficiary Giorgi Khorjevanishvili planted an apple garden in the village of Kvemo Khviti, Gori Municipality four years ago. In 2018 he had his first harvest but this year bad climate conditions destroyed more than 80% of the harvest. As farmer Khorjevanishvili told report.ge, he has not given up and aims to expand the production. He plans to harvest about 100 tonnes of apple in 2020 and speaks about the success formula.

‘I harvested 35,000 tonnes last year. In fact it was my first harvest. From my point it was a great result as we did our best. But this year we failed – the hail destroyed most of the apple harvest. Speaking frankly, I have not been afraid of the problem as I have the harvest insured. The insurance company has calculated the 83% loss that will be reimbursed by the end of October. I should revive the business now to increase the harvest volume to 100 tonnes next year. In Gori municipality fruit-trees are of high priority, this is why I decided to work in this field. Other regions provide different capabilities. We all are given an opportunity to improve the home economics and contribute to the rural development as well,’ farmer Khorjevanishvili said.

The Unified Agro-project has been operating since 2013. As of the 2018 data the establishment of 180 new enterprises was financed as part of the project. More than 880 enterprises have been re-equipped with the support from the government. More than 40 enterprises out of them process the apple where the farmers can bring the harvest for further procession.