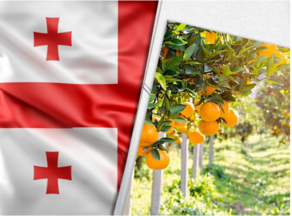 Georgia has exported the greatest number of cartons of citrus fruit to Russia, Armenia, and Azerbaijan in 2020.

The largest importer of citrus fruit from Georgia is Armenia, with its 7,109.6 tonnes of imported Georgian fruit with the highest dollar value worth 3,498.5 thousand.

Ukraine comes fifth on the list of the largest citrus fruit importers, with Georgia exporting fruit with a dollar value worth 57.3 thousand (180.1 tonnes) for the nine months of 2020.

Turkey ranks the last among the largest five countries, where Georgia has exported 199.6 tonnes of citrus fruit ($65.1 thousand).

Orange vintage starts at the end of October in Georgia. Preliminary data say that the Georgian citrus fruit harvest for the 2020 season is estimated at 40,000 tonnes, 20,000 tonnes less than that of the previous year.