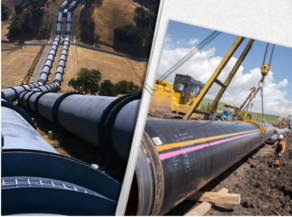 The Trans Adriatic Pipeline (TAP) is ready for commercial natural gas transportation from Azerbaijan to Europe. Consortium TAP AG writes about this.

According to them, the Trans Adriatic Pipeline, built to transport Azerbaijani gas to EU countries, has been commercialized.

The consortium said that about 4.5 years after the beginning of work in Thessaloniki, the pipeline is ready to carry gas. It means that the "Stage-2" and "Southern Gas Corridor" development of the Shah Deniz field is fully implemented, and these projects will primarily change the energy map of the Caspian region concerning Europe.

BP, a TAP shareholder, explains that after the completion of the last phase of the Southern Gas Corridor, this huge export system is fully integrated and ready to transport gas to Europe.

"This will allow us to transport Azerbaijani gas to Europe for the first time and, as a result, achieve the main goal set at the start of the project," the statement said.

The cost of the project was $ 40 billion.

The consortium TAP AG announced the completion of the pipeline on October 13 this year. TAP is 878 kilometers long, of which 550 runs through northern Greece, 215 kilometers in Albania, and 105 kilometers on the Adriatic seabed, the remaining 8 kilometers in Italy. TAP is the last component of the Southern Gas Corridor, a continuation of TANAP. The TAP pipeline connects to the Trans-Anatolian Pipeline - TANAP on the Turkish-Greek border, cross Greece, Albania, and the Adriatic Sea, and then runs off the coast of southern Italy. This pipeline should transport 10 billion cubic meters of gas annually to Europe. The capacity of the pipeline is 20 billion cubic meters of gas per year. It will transport gas from the Shah Deniz 2 field located in the Caspian Sea.