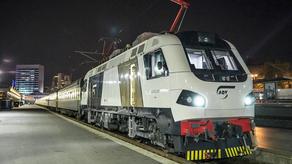 Baku-Tbilisi-Baku will be operated by French high-speed train. According to Известия Baku-Tbilisi-Baku passengers will be transported for the first time by a Prima M4 passenger train. Trains operating now, produced in the 70's, will be used for freight transportation.

The cooperation agreement between the Azerbaijan Railways and the French company Alstom Transport S.A. was signed on May 12, 2014. According to the document, Azerbaijan should buy 50 locomotives from the French.