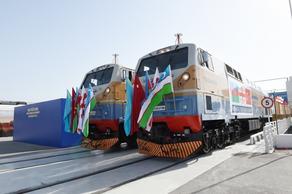 Following the 2019-2020 program of the Georgian government, the work aiming to launch the operation of the Baku-Tbilisi-Kars railroad in full capacity are underway.

Following the document developed by the Georgian ministries for the years of 2021-2024, the Georgian government plans to purchase private land plots in Marabda, Akhalkalaki, and Kartsakhi and pay compensation to the owners.

The document also reads that the government plans to build protective structures to prevent landslide on the railroad.

The government of Georgia has already presented both documents to the Parliament.

Baku-Tbilisi-Kars rail line opened on October 30, 2017. The railroad line connects Asia with the European railroad net. It is not the shortest way of connecting only three countries but also connecting Asia and Europe. This railroad connects Turkey, Kazakhstan, Uzbekistan, Kyrgyzstan, Tajikistan, and Afghanistan with European and world markets.