BTK may merge with Baku-Nakhchivan-Turkey railway 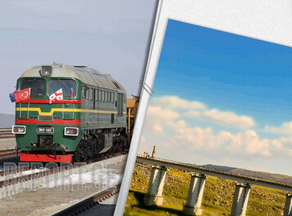 Turkey's plan to build a railway to Azerbaijan's Nakhchivan Autonomous Republic was publicized as early as 12 November. The railway project was named the Turkish Gate.

Oktay Tarnisever, the Head of the Working Group in the field of Energy Diplomacy of the World Energy Council Turkish National Committee and a professor at the Middle East Technical University, said that the Turkish Gate promotes the establishment of close links between Turkish-speaking countries of Central Asia and the formation of a trade corridor with China.

Mr. Tarnisever mentioned that this project would immensely contribute to bilateral trade and the development of Turkey and Azerbaijan, with this leading to the reduction of transportation tariffs.

After the plan to build a railway to Azerbaijan's Nakhchivan Autonomous Republic was disclosed, some experts expressed an opinion that Georgia might no longer be part of The New Silk Road project; however, others believe that the country has such a beneficial geopolitical situation that the prospect of Georgia losing its transit function is unlikely.

In order for Georgia to remain 'an influential player in this game', in experts' words, the country must establish a joint enterprise on the Kars Railway (with this being provided for in the agreement with Azerbaijan), as according to experts, foreign investments will be carried out here. Additionally, the Akhalkalaki railway station must become a pivot element of the European and Russian railway systems.

The Baku-Tbilisi-Kars railway line was officially opened in October of 2018. Its construction started in 2008 and ended in 2017.

The railway line connects railway networks of Asia and Europe. This is the shortest railway line connecting Azerbaijan, Georgia, and Turkey, as well as Europe and Asia. The BTK will halve the cargo transportation time and simplify the process of entering the world market by Central Asian countries, such as Turkmenistan, Kazakhstan, Uzbekistan, Kyrgyzstan, Tajikistan, and Afghanistan. A total of 263 km of the railway line stretches over the territory of Georgia.

In the words of Minister of Economy Natia Turnava, the capacity to send export cargo via the Baku-Tbilisi-Kars railway from Georgia to China via the shortest route can reduce freight cost and increase Georgia's competitiveness in the hub.

More detailed information on the BTK railway is available here.