Collection inspired by the Knight in the Panther’s Skin’ 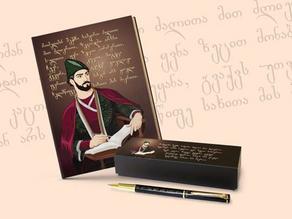 Graphic designer Shota Gochitashvili has digitalized the portrait of Shota Rustaveli. Well-known artists like S. Kobuladze, I. Toidze, V. Johansen, L.Gudiashvili have painted Rustaveli’s portrait. Shota Gochitashvili had to work hard to paint the great Georgian poet. He followed the black and white portrait by I. Toidze and did his best to paint the poet’s face, clothes and even the color of his eyes.

As the designer says he was ready and understood his responsibility from the very beginning.

‘I felt great responsibility from the very beginning as when you start to paint a portrait of a poet everyone knows and respects, you should also be ready for being criticized. Besides, it was really necessary the colored portrait of Shota Rustaveli to be created. This is why I decided it to be digital. I tried to study every single detail of the painting, imagine the colors, the tissue of the clothes and represent it in a digital manner afterwards. The clothes details were most difficult to paint. I did my best to maintain the details the rich people’s clothes had in the past. Hundreds of tiny details were required for creation of the fur which I processed manually. The green clothes Shota wears in the portrait was also been painted manually,’ Gochitashvili says.