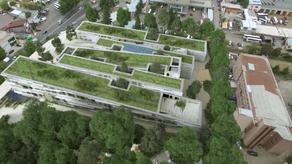 "A revolutionary project that will significantly change the relationship between business and state and improve the business climate", Giorgi Kvirikashvili, the ex-Prime Minister of Georgia said in 2016, while talking about the Business House that was due to open in late 2017. The project is now suspended.

“Construction is now suspended. The New Construction Company started building process but the main tender had to be declared by the Municipal Development Fund", the National Agency of State Property stated.

The tender, announced by the Municipal Development Fund in early 2018, failed. The results of the tender, according to which Ltd Dagi was declared the winner, was appealed. The new tender should have been announced in September 2018. According to the new tender, the estimated cost of building a Business House would not be GEL 71 million but GEL 55 million.

It was recently announced that Government City will not be built. The Ministry of Economy told Report.ge that the Business House will not share the same destiny and will definitely be built, but it is difficult to say when.