Criteria for possible use of common transit convention between 12 February, 2021  00:19 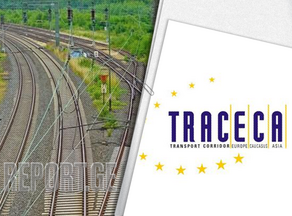 "The criteria for the possible application of the new common transit convention between the TRACECA countries are under discussion," Rufat Bayramov, the Permanent Representative (National Secretary) of the IGC TRACECA said, adding that the document will reduce time and expenses required for the transportation of goods.

In Mr. Bayramov's words, the project will pace up the digitalization of customs procedures between the countries.

"This project involves the formation of the special ecosystem platform, within the framework of which customs services, carriers, and other contractors will be enabled to exchange trustworthy information on transit goods inside the TRACECA countries," Rufat Bayramov declared, adding that today, competition is high, and additional advantages of this or that corridor increase its attractiveness.

Customs procedures are set to be digitalized in the TRACECA international transport corridor.

TRACECA's turnover in the Azerbaijani segment increases by 3%.

TRACECA (Transport Corridor Europe-Caucasus-Asia) is an international transport program involving the European Union and 12 member States of the Eastern European, Caucasian, and Central Asian region. The program's aim is to strengthen economic relations, trade, and transport in the regions of the Black Sea basin, South Caucasus and Central Asia. It has a permanent Secretariat, originally financed by the European Commission, in Baku, Azerbaijan, and a regional office in Odesa, Ukraine. Since 2009 the organization has been entirely financed by member countries.

The Intergovernmental Commission (IGC) TRACECA is open to all initiatives contributing to the development of regional transport dialogue and ensuring the efficient and reliable Euro-Asian transport links, promoting the regional economy on the whole.