Damage caused by the tragedy of Abkhazia to economy - PHOTO 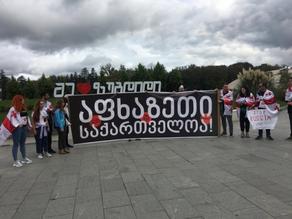 More than a quarter of the century has passed since the fall of Sokhumi.

Report.ge tried to find out with economists the scale of economic affect in addition to the territorial loss, 300,000 refugees and 25,000 dead as a result of the tragedy?

Irakli Jangavadze, Doctor of Economics says it is difficult to quantify the economic damage caused by the occupation of Georgia, but the fact that the income per person is lower today than it was 30 years ago answers many questions.

According to him the situation in Abkhazia  years is worse than in Georgia after 26.  The difficult economic situation is worsened by the increasing Russification. The situation is even worse in Tskhinvali region which is forgotten even by Russian tourists. In spite of the effort spent by Russia during 11 years, the so-called Abkhazia and Tskhinvali regions were only recognized by 7 states as independent states. These countries are:

According to the concept the Step to a Better Future, the products produced in Abkhazia and Tskhinvali should be exported as products originated from Georgia. Entrepreneurs residing in Abkhazia and South Ossetia will be able to obtain the relevant service and certificate in a single service center.