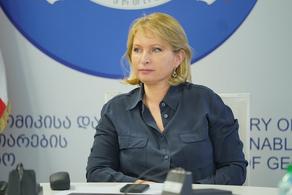 The foreign investments strategy and current projects in transport, energy, tourism, real estate areas and supporting the small and average business were discussed.

As the parties said at the meeting, Georgia is one of the attractive platforms for foreign investors.

They said that Georgia is leading in international ratings in many positions.

As Economic Minister Natia Turnava said, swift restoration of the economy and attraction of foreign investments represent the main priority of the Georgian government.

She noted that specialists like Vazil Hudak would significantly support the country.