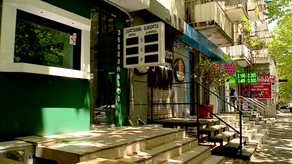 The national currency of Georgia has begun somehow gaining value recently, and as supposed, the closure of exchange booths was one of the reasons for it.

On April 1, the Georgian government closed the exchange booths; analysts said it might provide positive results.

The government's decision affected the companies in this field with the vast majority of small entrepreneurs.

As financial expert Vakhtang Khomizurashvili says, consumers who want to exchange currency at a commercial bank at a less favorable rate have also been affected.

He says the closure of exchange booths was 'a huge mistake.'

"Other facilities opened, and the currency exchange points must have been the first," he says.

"The closure of currency exchange points was good for the National Bank because the Lari started gaining value,'' he says.

The date of reopening the currency exchange booths across Georgia remains unknown.