Eight-day Camp 2020 held under the aegis of SOCAR 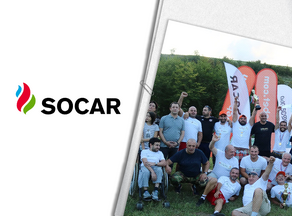 Within the framework of the project called "Active life is My Passion" and with the support of the SOCAR, an eight-day Camp 2020 was held for soldiers and war veterans wounded in different peacekeeping missions and military operations in the winery called "Makhare" located in the Terjola municipality.

More than 20 injured military men and 100 people with disabilities residing in regions of Georgia were involved in ten different kinds of integrated sports and cultural competitions. They participated in backgammon and domino tournaments, archery, arm wrestling championships, and paralympic sports, such as Boccia and sitting volleyball. A rafting championship was also conducted, with its participants vying for the champion title.

On Aug. 8, paintball contests and fencing bouts were symbolically held. Plus, a culinary competition involving two contestants was conducted the same day, with the main topic of the competition related to the August 2008 War in Georgia.

Sports federations and professional referees were involved in all activities. Winners of the first, second, and third places received pecuniary prizes.

The SOCAR has supported the "Active Life is My Cup of Tea" project for two years. More than 500 people with disabilities, wounded military men, and war veterans take part in the project activities annually.

The project boosts participants' motivation to lead an active lifestyle and demonstrate their skills and abilities in various sports.