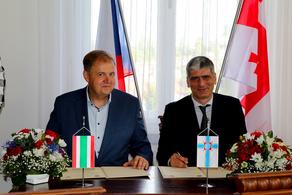 “We discussed the steps that need to be taken, in both institutional and legislative sphere, to make our economies more compatible, which will enable our citizens, our business and economy to achieve more favorable results under this agreement” – stated Georgia’s Prime Minister Giorgi Gakharia.

The meeting also covered the topics of visa-free travel between Georgia and EU countries, progress that has already been made by the country on the way to European integration and the future plans.

“We talked about the occupation. We thanked the European Union for the representation, the function they carry out on the occupation line. However, we also noted that both sides must do everything in their power to enforce the mandate throughout the territory, which will ensure the protection, safety and security of our citizens.We also talked about the further democratization process in the country and agreed that the basic functions of democracy and their values will be preserved and deepened in our country. “, - mentioned the Prime Minister to media during the joint meeting with Johannes Hahn.