Expectant dads to be entitled to paternity leave 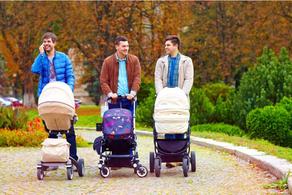 In accordance with the changes to be proposed to the Labour Code, maternity leave conditions may be improved.

At present, allowing fathers to enjoy paternity leave is optional; however, this condition is also set to be included in the updated version of the Labour Code.

Giorgi Tkeshelashvili has already enjoyed the privilege of paternity leave twice, and other male employees expressed the same desire. Mr. Tkeshelashvili told Report.ge that his employer took the existing situation into account and granted a period of absence from work to other fathers too; however, as per him, not everyone follows his lead.

Trade Unions informed Report.ge that some fathers even filed lawsuits against their employers who refused to grant them paternity leave.

The corresponding change is to be introduced to the Labour Code, and fathers will be provided the possibility to take their paternity leave. Changes are intended to be beneficial for mums too: now they will receive 80% of their income for 6 months after taking their maternity leave, instead of receiving a one-time 1,000 GEL.

Amendments to the Labour Code will presumably be registered in the legislative body at the end of October.