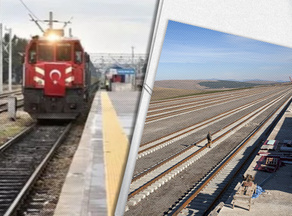 A freight train has made the first transit from Turkey to China today via the Baku-Tbilisi-Kars railway. Turkey's state railway Transport AŞ released this information as early as yesterday. Turkey's Minister of Transport and Infrastructure Adil Karaismailoglu supervised the departure of the transit train, which left Istanbul at 2 p.m. Export goods were placed in 42 containers.

The transit has been made in cooperation with TCDD Tasimacilik AS and Pacific Eurasia. The train will pass through five countries, leave two continents and two seas behind (a total of 8,693 km) and will deliver the cargo to China in 12 days.

Turkey's Ministry of Foreign Affairs says that Turkey will keep strengthening ties between the East and the West and taking required steps to ensure its primary role in the region.