First new university to be founded after restoration of independence

First new university to be founded after restoration of independence 18 September, 2019  20:42 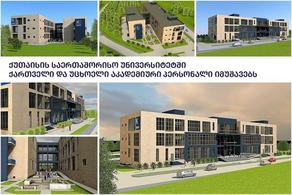 “After restoration of Georgia’s independence, a new state university is being founded in the country for the first time,” this statement was released by Georgian PM Giorgi Gakharia after presenting new learning space at Kutaisi International University to the public.

As per the PM, development based on knowledge is most sustainable and significant.

“Otherwise we will prove unable to be competitive in different fields and, most importantly, our young people will find it difficult to be competitive. That’s why first of all I want to express my gratitude to CARTU, to Bidzina Ivansihvili for this great initiation, and I do hope that we will see the first graduates soon,” Giorgi Gakharia stated.

Admissions at Kutaisi International University starts in September, 2020. The idea of establishing the University belongs to Ivanishvili. The project, which was presented on Sept 8, 2016, is being entirely financed by The International Charity Foundation CARTU, with its approximate budget being a billion euro.

The event was attended by Chairperson of Georgian Dream Bidzina Ivanishvili, President of Georgia Salome Zurabishvili, the Chairperson of the Georgian Parliament, representatives of the executive and legislative government and academic circles, as well as young people.