Flights from Russia to Georgia may resume 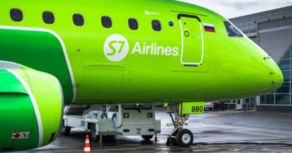 Flights from Russia to Georgia may resume. Ross Aviation has allowed Russian S7 Airlines to fly from Moscow to Kutaisi. The information was released by the Federal Air Transport Agency on the web page of Sova News.

According to the order, the airline can operate Moscow-Kutaisi flights 7 times a week.

S7 Airlines are on second place with the number of passengers carried from one country to another. The headquarters of the company is located in the small town of Ob.