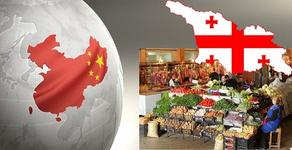 Following enhancement of its trade relations with China, Georgia has failed to enjoy even a minimum benefit. Against this backdrop, when Georgian market abounds with Chinese products, exported products to China, including wine, have reduced in number.

The government is exerting efforts to increase the number of agricultural products on China’s market. Obviously, this trend is immensely positive, but the country’s resources to achieve this aim are limited, whereas Chinese products may become absolutely dominant on the market.

As per analytical expert Gia Khukhashvili, in this situation only one winning party exists, which is China; however, economist Emzar Jgeneraia disagrees with him and thinks that Georgian businessman have been provided with a good opportunity to achieve success on the new market, and they must take advantage of it.