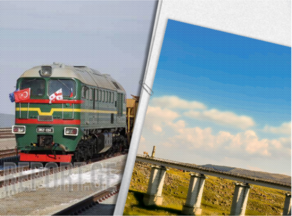 Mr. Karaismailoğlu pointed out that Turkey carries out container transportation to Georgia, Azerbaijan, Kazakhstan, Uzbekistan, Kirgistan, Tajikstan, Russia, and China. According to him, the recent Suez Canal crisis once again demonstrated the significance of the Middle Corridor. In 2020, the BTK freight transport volumes surged by 104% and reached 396,778 if compared to that of 2019.

''The BTK railway has proved itself as a new transportation route worldwide. Against this backdrop, when the coronavirus pandemic is raging, the demand for transportation has considerably risen via the said railway and the Middle Corridor. The latter enjoys high demand thanks to our country's port infrastructure and enables us to transport freight from Azia to the Middle East, North Africa, and the Mediterranean. The Europe-China freight turnover amounts to around $ 710 bln annually. The countries through which the Middle Corridor passes will enjoy tremendous benefits from freight transportation,'' Mr. Karaismailoğlu said.

The Baku-Tbilisi-Kars and Baku-Nakhchivan-Turkey railway lines are planned to be merged into one. After the plan to build a railway to Azerbaijan's Nakhchivan Autonomous Republic was disclosed, some experts expressed an opinion that Georgia might no longer be part of The New Silk Road project; however, others believe that the country has such a beneficial geopolitical situation that the prospect of Georgia losing its transit function is unlikely.

The BTK railway is deemed more profitable to transport freight than traditional sea transport; however, it is still functioning in a test mode.

The BTK opened on 30 October 2017; it connects Europe-Asia rail networks. It is the shortest possible route not only among the three countries but between Asia and Europe also.