GEL exchange rate can no longer be managed 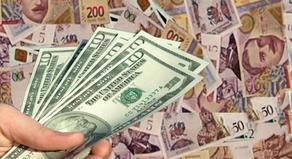 The GEL exchange rate is no longer subject to any economic rules.

As financial market researcher Vakhtang Khomizurashvili reports, the Lari depreciation and devaluation are both terrible and only means the economic stagnation.

He says the GEL exchange rate may be lower than three GEL, but it cannot be a definite fact.

He says that in fact, GEL cannot be no longer managed, and National Bank interventions also fail to give any result.

"The economy experiences a huge fail for many reasons. Export and import rates also lag behind due to the drop in consumption. Thus, the demand for the dollar has decreased. It is not surprising that the GEL constantly fluctuates," adding that the economy is 'in coma' currently.

In the long term, if the government fails to take measures to change the economy, the process will end with deflation that can turn into high inflation swiftly.

"Neither GEL depreciation nor gaining value is not normal, meaning that the economy is shrinking, the demand for money is decreasing that can lead to deep crisis," he says.

"The government should adopt an economic reform program in time which should imply attraction of investments and not tourism on which Georgia has been focusing for years," Khomizurashvili adds.